Last week we attended Supercharged: Marketers and Machines, a day packed with discussion about the rise of AI. With an impressive speaker list from both agency and client sides, here’s our roundup of 3 of the day’s hottest topics.

Several speakers alluded to Gartner’s hype cycle (below), with most agreeing that we’re approaching the Peak of Inflated Expectations. While we have plenty of ideas about how AI could transform just about all areas of our lives, the technology isn’t yet mature enough to turn these visions into mainstream reality. 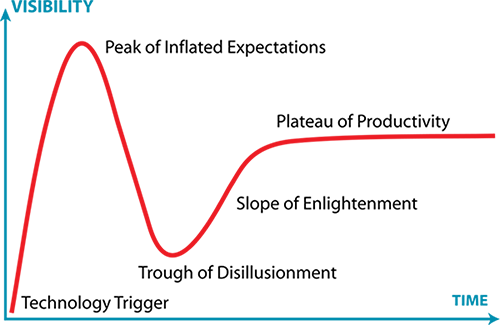 There’s been an explosion of chatbots on Facebook messenger over the last 12 months, but the majority of these rely on scripted conversations rather than Natural Language Processing. This means they answer your question with a canned response, or guide you through a pre-set decision tree, rather than genuinely understanding what you say, or responding with true ‘intelligence’.

On the day, the team behind Just Eat’s popular Facebook bot explained how it was built. The process began, as all good processes do, with a spreadsheet. This listed out every plausible question a user might ask, remark they might make, or sweary insult they might type in shouty capital letters. The team then wrote a canned response for each. The bot works well, and has a sense of personality (tell it to F off, and it’ll tell you that you’re just hangry), but it clearly took a lot of manual work to create. Other bots presented on the day relied on the user clicking yes or no to a series of questions, without having the ability to input free text. So while this breed of bots are undoubtedly useful, they’re not truly examples of ‘artificial intelligence’.

2. Man and machine, not man versus machine

Several speakers suggested that AI is actually more about ‘augmented’ rather than ‘artificial’ intelligence – arguing that the goal is not to create machines capable of emulating human thought and behaviour, but in capitalising on the value of the human/machine partnership. While tech can process information at superhuman speed, real people are still required to make decisions on what to do with this data.

Jeremy Waite, an Evangelist at IBM’s Watson, illustrated this perfectly, by demonstrating how Watson could be used to perfect a flagging CRM campaign. He asked Watson for detailed analysis of how the campaign was performing compared with previous campaigns, before requesting to see the subject lines of the best performing email sends of the year. This data was generated in seconds, allowing him to quickly update the headline of the ailing campaign to be more in line with previous high-performers, before commanding Watson to re-send. The process itself is nothing new, but the technology enables days’ worth of manual research to be done in seconds. Similarly, the CEO of Phrasee talked about using the power of AI to generate the ‘perfect’ email subject lines or calls to action, based on huge volumes of data and a scientific approach to sentence construction.

Dr Nicola Millard, Head of Customer Insights and Futures at BT also talked about the power of humans and machines working together. In the arena of customer service, she identified the powerful role AI can play in triaging customer complaints. While bots can be used to help customers reach the right department, ultimately, it takes human empathy and understanding to interpret the nuance of complaints and respond in an appropriate way. For instance, machines are incapable of detecting irony, and so would not understand the true meaning of a sarcastic ‘Thanks a lot for putting your prices up’ or ‘I really enjoy having to wait on hold for 15 minutes’. And that’s something we’re a long way off being able to programme.

3. Time to kill the boring bots?

Copywriter Nick Asbury asked us to think of our favourite bots in pop culture or sci-fi. Whether it’s Red Dwarf’s Holly or Space Odyssey’s Hal, or Knight Rider’s KITT, they’re distinct, memorable characters in their own right. So why, he asked, are the bots we most commonly interact with so totally devoid of personality?

You might find Siri useful, but do you like her? And are you sufficiently attached to her to even think of her as ‘her’, or simply ‘it’? Asbury argued that those developing AI must consider the role of bots not simply to undertake functional tasks, but also to entertain us  – they’re not just building platforms but creating characters too. The likes of Alexa and Cortana are proving their worth in terms of utility, but are yet to win our hearts.

He asked why brands don’t experiment more and move out of the ‘neutral’ personality zone – what would a grumpy bot look like? How would a sarcastic droid play out? Would an excitable personal assistant ever work?

On this theme John Straw, Senior Advisor to McKinsey & Co. suggested one measure of a bot’s success is whether users say ‘thank you’ and ‘goodbye’, and it follows that the more personality we give them, the more likely this becomes.

The only downside of this line of thinking is that we’re forced to concede David Hasselhoff had it right in the 80s when his best friend was a talking car. But progress usually comes at a price.