Innovations in the rail industry from around the globe

The rail industry is fast adopting digital technology to streamline the customer experience, improve customer journeys and ticketing, as well as to enhance the management of the infrastructure – such as to reduce delays, anticipate problems in rail stock and machinery.

Countries in Asia and rapidly developing nations, without historic and legacy systems, are setting the pace in innovation and digital adoption, leaving many Western countries playing catch-up. Yet, that said, change is afoot, especially here in the UK.

The latest RailTech event, HackTrain’s Hackathon 4.0, taking place later this month, aims to put the railways back on the map as a reliable and viable alternative to car and airplane travel. In previous years, developers, creatives and innovators have joined forces on board the HackTrain to solve many of the UK’s and Europe’s issues in the rail industry – from devising smart tickets, to managing congestion at peak times on trains and at stations, as well as simply providing the travelling public with up-to-date information about their train services.

ORM is proud not only to be a sponsor of this year’s HackTrain, but to also be a part of the innovation teams riding the trains too. This year our MD and CTO, Keith Nation, will be a mentor on board. He will be joined by members from our design, development and strategy teams, who will be working alongside some of the best and aspiring developers, entrepreneurs, designers and policy makers in the business.

Ahead of HackTrain, we’ve scoured the globe for examples of cities and countries that have adopted innovative digital and technological solutions on their railways. Here are some of our favourites:

The UK rail industry is looking to adopt AI and facial recognition technology to end railway ticket barriers and the associated rush-hour queues. The system, which uses two near-infrared lights flashing at high speed to help a camera to capture the shape, texture, and orientation of a face in unprecedented detail, down to the wrinkles and the texture of the skin, is being developed by the Bristol Robotics Laboratory and Customer Clever.

Deutsche Bahn has been working with Hyperloop Transportation Technologies (HTT) to develop augmented reality windows on its ‘Innovation Train’.

In Boston in the US, Keolis Commuter Services has deployed smart glasses (created by AMA XPertEye) to link staff in the field with technicians back at the maintenance headquarters. Images from the glasses can be transmitted back to the base so that office staff can offer advice and support to teams on the ground, without having to travel to the site of the problem.

Seoul, South Korea, is the most connected and digitised city in the world. Home to 10 million people, it’s mayor’s department collects and uses data in real time to keep the city moving. Data is gathered at stations and sent to a central system where payments are processed. The subway system transports 7 million people every day. The entire network from wheels to workers relies continually on data – which is used to plan the transport schedule. Rail operators can continually adjust the speed and frequency of trains to keep everything running smoothly.

Smart cameras measure how many passengers are boarding, and how quickly. Sensors, on the trains and tracks, monitor every last component to provide early warnings when maintenance is required and prevent a costly breakdown. Workers at TOPIS – Transport Operations & Information Service – use smartphone apps, social media (Twitter) and the web to give citizens real time alerts and alternative routes where there are problems/breakdowns/accidents. 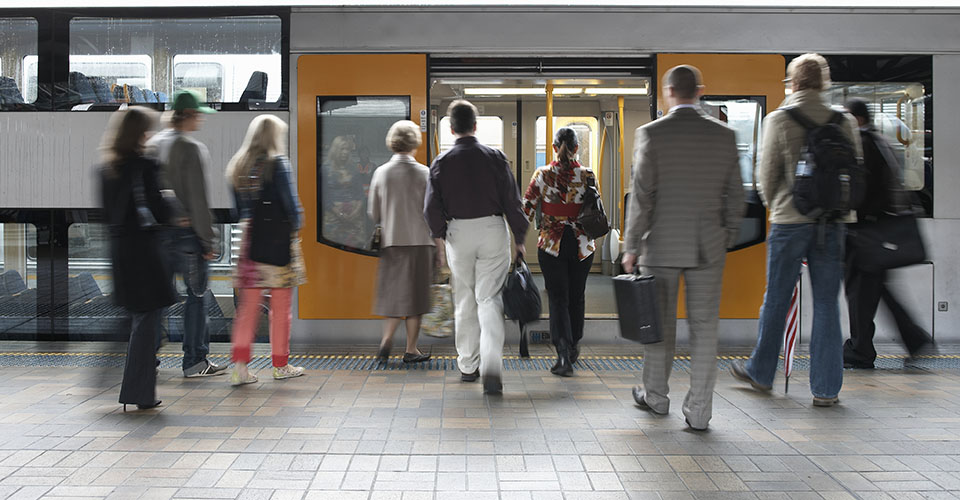 Digital twins, a software model of a physical thing or system which can be used to analyse and simulate real world conditions, is being used by Crossrail in London. The digital twins are being used to garner a deeper understanding and assessment of maintenance, bringing the work of engineers and data scientists closer together.

Copenhagen, Paris, Singapore, Dubai and São Paulo are just some of the cities that are running driverless passenger trains using automated systems. This is helping to optimise the running time of trains and increase the average speed of the system, allowing more trains to operate closer together, reducing the time it takes a train to slow down at stations, and increase reliability.

The Dubai Metro is the longest driverless metro network in the world, spanning 75km. The Copenhagen Metro, one of the first to feature a fully automated system, including depot operation and launching, operates 24 hours a day. São Paulo’s Metro Line 4 is South America’s only fully automated, driverless subway line. It carries around one million passengers per day.

In Germany, the national railway company Deutsche Bahn is trialling micro drones to detect trespassers on its land and to deter vandals from graffiting on its property. The cost of removing the murals came to more than £6 million in 2012.

The Russian Railway Research Institute has struck up a partnership with Netherlands-based Energy Floors to harness energy from the footfall of its busiest stations. Electricity from footsteps will be used on site or fed into the grid, meaning that just by going about their daily commute, people will be creating a cleaner energy environment.

A similar trial is underway in St Omer, France, where part of a pavement outside a busy station has been fitted with 14 of Pavegen’s energy tiles. These tiles harness and convert kinetic energy from passers-by into electricity that powers parts of the station.

The Australian freight company, Rio Tinto has successfully operated its first fully-autonomous freight train on its iron ore network in the Pilbara region of Western Australia, in October 2017.

The 100 km pilot run from Wombat Junction to Paraburdoo was completed without a driver on board. Throughout the trip, the train was closely monitored in real time by Rio Tinto teams and representatives from the Office of the National Rail Safety Regulator, both on the ground and at the Operations Centre in Perth.

Satellite technology is being used to reduce collisions between trains and reindeer in remote areas of Norway. The animal tracking technology developed by company FindMy, as a result of a hackathon organised by mapping authority Kartverket, have created a SaveMyReindeer app and GPS tracking collars to alert both train drivers and reindeer owners of potential collisions.

Train drivers are alerted when they are approaching the herds of animals so they can accelerate to get out of the herd’s way, slow down or stop the train. The reindeer owner also receives a smartphone alert warning them that their animals may be in danger, giving them the opportunity to move their herd.

Hyperloop (a proposed magnetic levitation train travelling at high speed in a low pressure transit tube), the brain-child of the billionaire entrepreneur Elon Musk, is one step closer to becoming a reality as in September 2017 the company, Hyperloop One (which Richard Branson has recently invested in) successfully completed its second test, in which the pod hurtled through the near-vacuum test tunnel at speeds of 309km/h.

TripGo, an app that provides real-time and multimodal journey information for planning door-to-door journeys, is available on iOS, Android and the web now. In addition to its core purpose, the app provides various comparisons on price, trip duration and carbon emissions, and allows the user to prioritise which is most important to their journey. Currently travellers can use the app in 50 locations worldwide, including Ho Chi Minh City, Dublin, Sydney, Vancouver, Auckland and Chicago.

Personal Rapid Transit (PRT) pods, which have been used at Heathrow airport since 2011, may find more applications in the future. PRTs can be powered by clean energy and some proposed systems use magnetic levitation to connect vehicles to a high-speed guideway, eliminating vibration, pollution, noise and the usual wear caused by moving parts.

In the UK, a company called Raildar has used National Rail’s vast Darwin Data Feed to create junction maps that plot trains as they move across the networks. Using real time data, Raildar’s app shows the location of trains and reveals real-time arrivals and departures, delay estimates, platform numbers and more. Launched in 2014, the app allows users to click on any train to see every stop it is due to make, the precise time it stopped at each location (to the second) and the number of minutes it was delayed.

The Netherlands have adopted an Oyster-style smart card called the OV-Chipkaart, which allows passengers to pay for any journey by touching in and out. London, since 2003, has long lead the way with contactless payments on its travel network. TfL now accepts credit and debit cards for payment, doing away with the need for topping up credit on a physical card.

By the end of 2018 SmartCards will be mandatory on all of the UK’s rail network.

What looks like something straight out of fiction is now a fact. Virtual shops have sprung up in Seoul, South Korea, and there are plans to introduce them in China too.  Homeplus (which is 95% owned by Tesco) set up its first virtual shop in 2011 along the platform of the Seonreung subway station, displaying over 500 of its most popular supermarket products. Smartphone users can scan a QR code of a product they want to buy. If the order is placed before 13:00, Homeplus will deliver the shopping to their home the same day.

We’re entering a new golden age of travel, with a whole range of next generation mass and personal transportation modes emerging. One thing you can be sure of is that once these enter the mainstream digital will be at heart, allowing you to plan, predict and pay for your journey with greater speed and accuracy than ever before. The large Silicon Valley tech companies are all competing to own the space, with self driving cars and data integration initiatives such as Google Transit. Existing providers are also rising to the challenge, developing new digital services around the wider customer experience, rather than simply focusing on the physical transport of customers from A to B. Ultimately, all of this innovation is great news for passengers and brings welcome change to the sector.

Millennials: why they matter to financial services
Read about it

Hackathon inspires innovation in housing associations
Read about it